There are 13 bat species commonly found in Illinois, but the big brown bat, little brown bat, eastern red bat, and silver-haired bat are the most commonly encountered species by people.

Our teams of bat removal specialists are providing solutions to homeowners across the Chicagoland area. With our bat exclusion system, we have successfully treated hundreds of homes suffering with minor to major infestations. Our bat control services include: 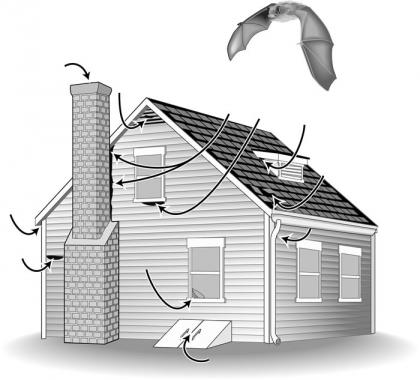 In Illinois, bats are protected under the Wildlife Code. All of Illinois’ bats are insectivorous. Since they hunt insects, they have a plentiful food resource during spring and summer. However, as cooler weather sets in bats must either migrate to warmer areas where they can continue to find food or find a place where they can hibernate over the winter to conserve their energy. Therefore, bats may find refuge in buildings during the year in Illinois.

Two of the most common bat species we encounter in this area are:

Both sexes roost together in caves and mines during the winter. Females form nursery colonies in hollow trees, under loose bark on trees, or in buildings during the spring and summer. During the summer males live alone or in small colonies, roosting in trees, in rock crevices, or under siding or shingles of buildings. During the fall, both sexes roost in trees.

During the winter both sexes roost in caves, tunnels, rock crevices, hollow trees, or buildings. Females form nursery colonies in hollow trees or attics during the spring and summer. Males are typically solitary during the early part of summer and roost in crevices in buildings or caves. Both sexes may be found together in roosts in late summer and fall.

Bat droppings, called guano, are usually found in piles near the roost. They appear shiny and are brittle due to the remains of insects.

It is possible that their dropping may contain histoplasmosis, a fungal disease that may affect humans and produce flu-like symptoms. Bats, also, may carry rabies, and like most wild animals, try to avoid contact with humans. However, due to the loss of their natural habitat, bats may establish roosts in attics or abandoned buildings. The best way to avoid contact with bats is to exclude them from buildings on your property.

Illinois Department of Public Health – Large accumulations of bird or bat droppings should be removed by a professional cleanup and restoration firm experienced with hazardous waste disposal. For more information, see the Centers for Disease Control and Prevention document Histoplasmosis, Protecting Workers at Risk.

Depending on the species, females give birth to one or two pups each year, usually in May or June. Bats are relatively long-lived; most live an average of 4 to 6 years.